From exploring the South Coast’s mighty waterfalls and black sand beaches to checking out new museums like the Tales from Iceland Museum in Reykjavík, Iceland is one of my favorite travel destinations. Iceland’s natural scenery is breathtaking and there are bold new adventures to have at nearly every turn. So as I plan my third trip to Iceland and use resources like Travelade to pick new tours and activities, I’ve been feeling nostalgic. I’ve found myself reminiscing about my day trip to the Snæfellsnes peninsula in Western Iceland. Nicknamed “Iceland in Miniature” for its diverse landscape, the peninsula is only a few hours from Reykjavík. The Snæfellsnes peninsula has rolling farmlands, extensive lava fields and is home to small coastal villages and several salmon fishing rivers. Yet one of the highlights from my day trip to Snæfellsnes was the guided tour of Vatnshellir Cave.

Although my bus tour to the Snæfellsnes peninsula was jam-packed with sightseeing, exploring the Vatnshellir Cave was the most anticipated part of my trip. I have a fascination with caves (I’ve visited caves in Bermuda and Ireland) and I love getting up close and personal with what exists underground.

Towards the end of the trip, our bus dropped us off in front of a small wooden workshed sitting in a mossy lava field at the opening of Vatnshellir Cave.

Vatnshellir Cave is one of the most visited caves in Iceland. It’s also where the book, “Journey to the Center of the Earth” by French author Jules Vernes started.

Vatnshellir Cave or “Water Cave” is a 8,000-year-old lava tunnel under Snæfellsjökull glacier at the Snæfellsnes National Park. The lava cave was formed after a nearby volcanic eruption. As the lava flowed down the hill in a narrow lava river, it started to cool at the top forming the roof of the cave. When the eruption stopped and the tub emptied out, it left behind a hollow lava tunnel which visitors to the national park can explore with expert guides.

There are actually hundreds of lava caves scattered throughout the Snæfellsnes peninsula; Vatnshellir Cave is only one of them.

Before descending into the cave, we were introduced to our tour guide from Summit Guide Adventures, the only tour company given permission to conduct tours at Vatnshellir. We were outfitted with bright orange helmets and hands-free flashlights. After reviewing the safety procedures, we were told to close our pockets, watch our step and to not take any of the rocks with us.

Although this is a tourist destination, preservation and conservation are the biggest priorities.

We were more than welcome to take photos and videos inside the cave but I found multitasking extremely difficult. 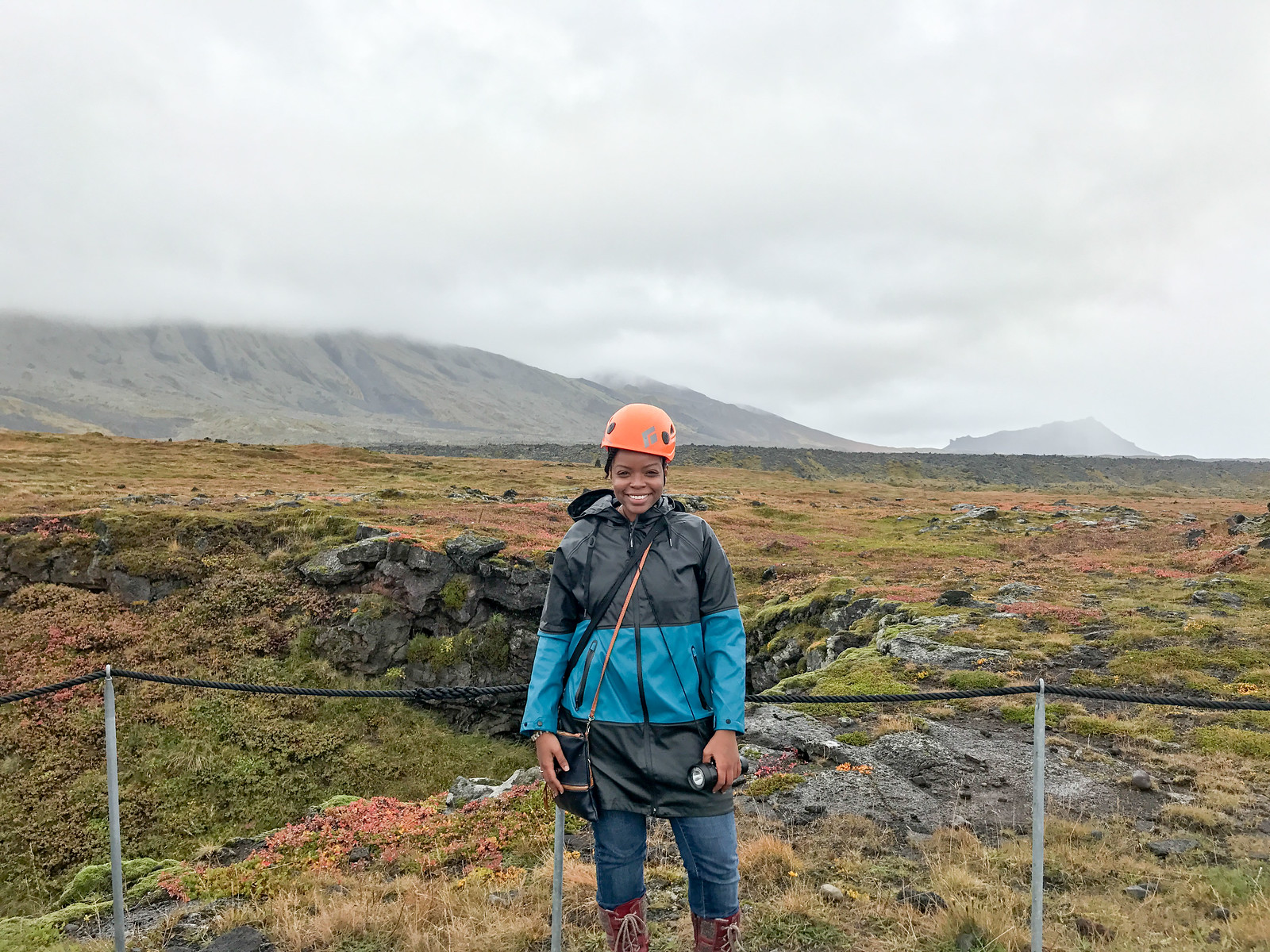 We then walked into a small metal silo with a cone-shaped roof with the sign “Undirheimar” or “Underworld”. If you ask me, the silo looked like an incognito time machine! Down a long spiraling staircase, we followed our guide single file.

Since the cave is extremely cold (just above freezing), I recommend wearing gloves, warm layers, and sturdy shoes to feel comfortable.

Besides our flashlights (the only lights in the cave), the cave was pitch black. As the name of the cave suggests, Water Cave, you’ll find a lot of water dripping inside the cave.

Back in the day, farmers would come to the cave and accumulate melted snow here for their livestock. Since there aren’t any bodies of freshwater nearby, the cave served as an important source of water for the local community.

The flooring of the cave was slippery and uneven so I held onto a rope for support as I admired the lava formations. We spotted all sorts of stalagmites and stalactites and visited a pair called “The Twins”. Our guide shared more about the region’s geology and we even discovered the mythical creatures that party inside the cave.

The cave’s walls are purple, chocolate brown, and magenta.

Turn Off the Lights

Before bidding Vatnshellir Cave farewell, at the deepest section of the cave, our tour guide invited us to turn-off our lights and close our eyes. You can imagine the grunts and moans but honestly, this was the most memorable part of the tour because the cave has been like this, quiet and still, for over 8,000 years!

We stood there in total darkness for one minute listening to the cave.

Surprisingly, it did not feel eerie. And from time to time, I could hear the occasional drop of water but overall, the cave was still. Closing my eyes and turning off the lights is something that I would have never thought about doing in a cave but hey, this is Icelandic tradition!

Although exploring the depths of Vatnshellir with super-powered flashlights was fascinating, having the courage to turn them off made my lava cave experience in Iceland that much more special.

Snorkeling Between the Shifting Tectonic Plates At Silfra

Visit Secret Waterfalls and Glaciers Along the South Coast of Iceland

Historic Spots in Reykjavík That You Probably Don’t Know About

This is a collaborative post with Travelade, all opinions are my own. 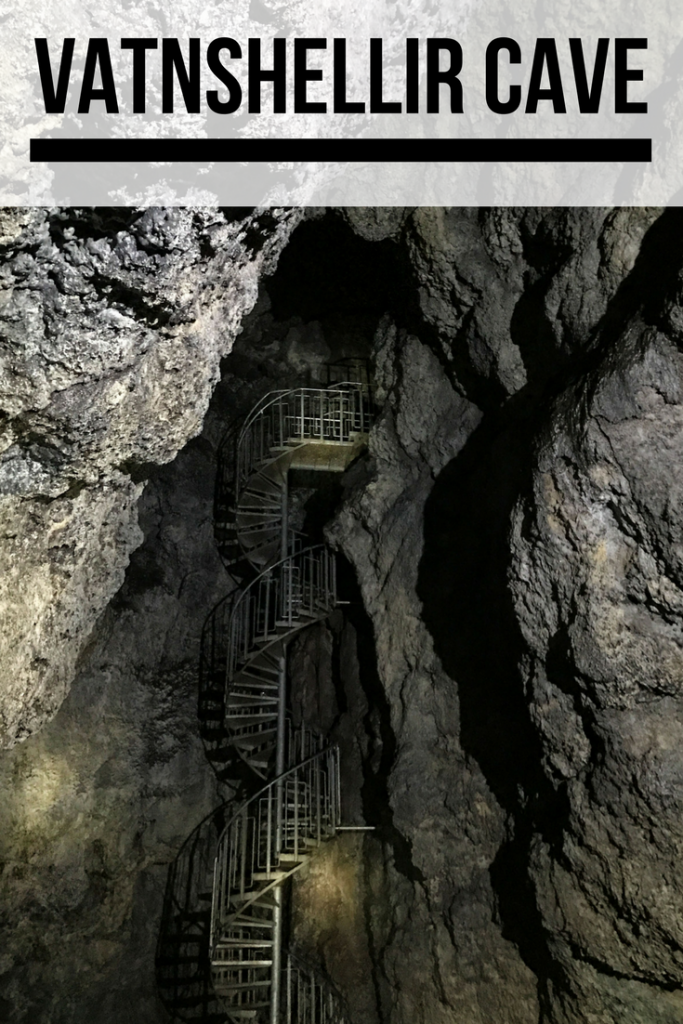