Melting ice caps crashed into the lagoon as chunks of ice slowly drifted downstream. Surrounded by rugged rocks and dark sand plains, I stood at the foot of the Sólheimajökull glacier entranced by the gorgeous landscape. Never in my wildest dreams did I think that I would walk to the edge of a glacier and touch it with my bare hands! With happy tears streaming down my face, this is one of the highlights from my tour of the Iceland South Coast.

Although rugged, Sólheimajökull was calm and peaceful.

From snorkeling Silfra to horseback riding in the highlands, my 4 day trip to Iceland was jam-packed with first time experiences and lots of adventure. Although I spent most of my time exploring Reykjavík, I also wanted to see the countryside. Known as “The Land of Fire and Ice”, I couldn’t miss Iceland’s stunning landscape and rugged natural beauty.

With only a day to spare, I had to decide on which guided tour I would take. Would I go on Blue Lagoon trips, tour the popular Golden Circle, or would I go for something else like the Snaefellsnes peninsula?

Although the Golden Circle and the Blue Lagoon are incredible attractions in Iceland, I booked a guided tour of the Iceland South Coast after falling in love with photos of the black sand beaches and roaring waterfalls.

On a sunny day, see as many as two rainbows at Skógafoss!

The first stop on my tour of the South Coast was Skógafoss, a majestic 200 feet waterfall. Skógafoss is one of the largest waterfalls in Iceland and it’s a popular destination to visit on the Iceland South Coast.

Even with partial views of the waterfall from the parking lot, I could tell that Skógafoss was massive. To get a closer look, I walked along the gravel beach to the base of the waterfall.

Skógafoss was so powerful that I could feel the spray even at a distance. Expect to get wet, so wear a waterproof jacket and boots to stay dry.

Aside from the sheer size, one of the striking things about Skógafos was the surrounding greenery. Both the cliffs and the neighboring turf were lush and green. In addition to the waterfall, I also explored the River Skógá. I dipped my hands in and as expected, the water was freezing!

A friend of mine even drank from the river which is perfectly safe – hey, when in Iceland!

On the side of the waterfall, there were stairs that led to a lookout offering fantastic views as far as the Atlantic Ocean. The five hundred and twenty-seven steps also led to one of the most notable hiking and trekking trails on the island. There are over twenty waterfalls to see on this route, so technically, Skógafoss is only the beginning!

Unfortunately, I didn’t get a chance to hike to the top, but this is something that I would love to do next time I visit the South Coast of Iceland. 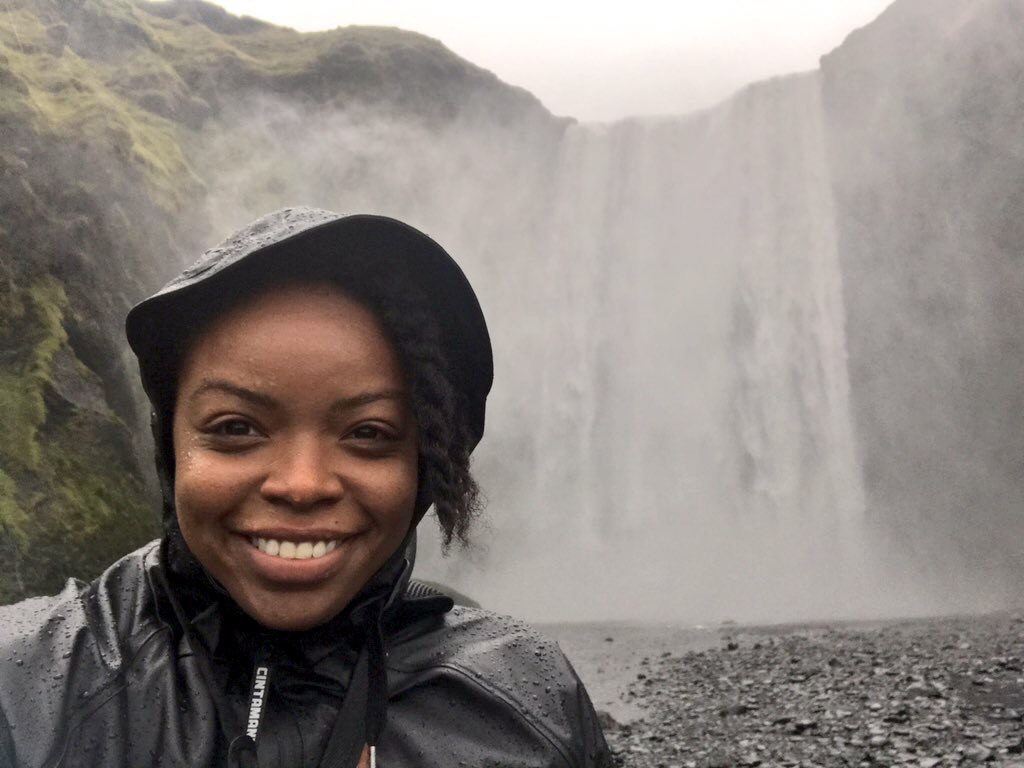 Update September 2017: During my second trip to Iceland I visited Skógafoss again but on slightly different terms. This time I toured the South Coast during an autumn storm. I was completely drenched from the high winds and torrential downpour but I had another fantastic time chasing waterfalls in Iceland.

Before heading to another popular waterfall on the South Coast, I stopped at Gljúfrabúi, a secret waterfall hidden in a canyon. I have to say that I would have missed Gljúfrabúi completely if I wasn’t on a guided tour.

Since there was no footpath into the narrow gorge, I playfully hopped from rock to rock until I reached inside the cave. Stepping in the river is inevitable, so I would recommend wearing a pair of sturdy waterproof boots.

Inside the canyon, the cascading water looked like it was pouring down from the heavens. The cave had no roof which allowed for lots of sunlight to shine through.

To the right, there’s also a large boulder called Franskanef (the French nose). Franskanef partly covers the base of the waterfall. Carefully stand on Franskaneft for a different perspective. 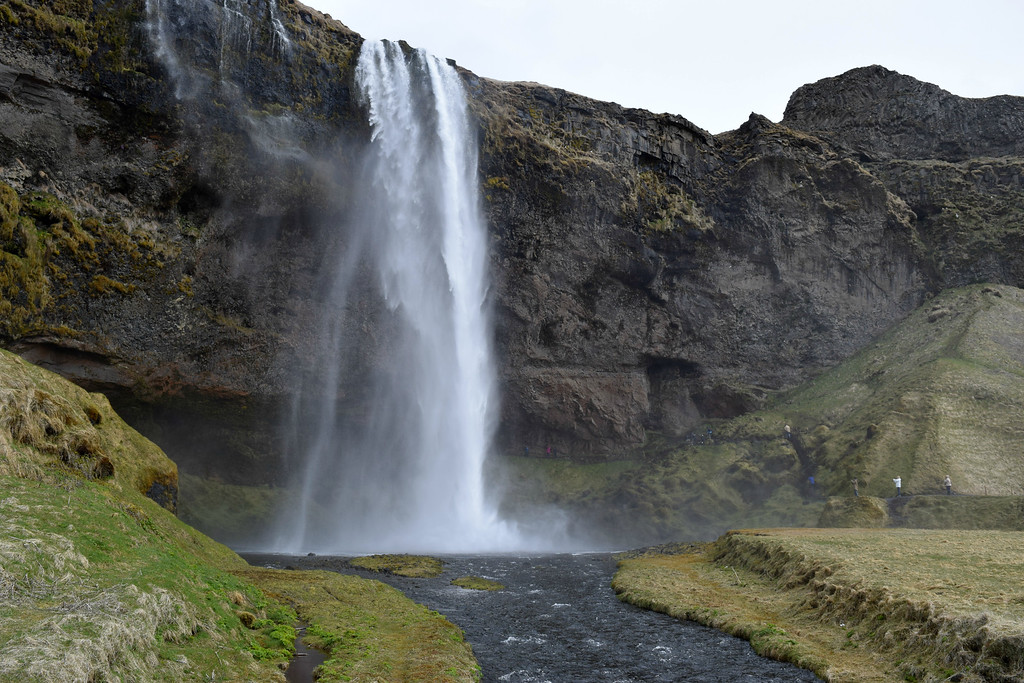 The last stop on my Iceland South Coast tour was the awe-inspiring Seljalandsfoss. From the secret Gljúfrabúi, I walked across a lush green field to a waterfall, unlike the rest.

Seljalandsfoss is a testament to Iceland’s breathtaking natural beauty and it’s one of the only waterfalls in Iceland that you can walk behind, weather permitting of course.

At the bottom of the cliff, I walked on a footpath that looped behind the falls. Although the climb didn’t look intimidating, I’d recommend taking it slow. Not only is the footpath wet and slippery, but there are no handrails for safety. If you’re clumsy like me, you’ll probably get all muddy holding boulders and cliff walls.

Behind the waterfall, you can see the surrounding meadow or look down at the pool flowing into the Seljalandsá River.

Kirkjufellsfoss by Inspired by Iceland

My ten-hour tour of the Iceland South Coast was more than I could have ever imagined. This tour highlighted some of Iceland’s picturesque waterfalls and glaciers, and I also learned about the dramatic effects of global warming and volcanic eruptions.

I ate lunch at a small fishing village, spotted puffins nesting and heard Icelandic folklore for the first time. I walked away from this tour with a greater appreciation for the Icelandic way of life and I took over five hundred photos as proof.

There’s so much to see in Iceland and as my quest to explore the countryside continues, I’m looking forward to seeing more glaciers, volcanoes, and waterfalls.

What are YOUR favorite Iceland South Coast sights? 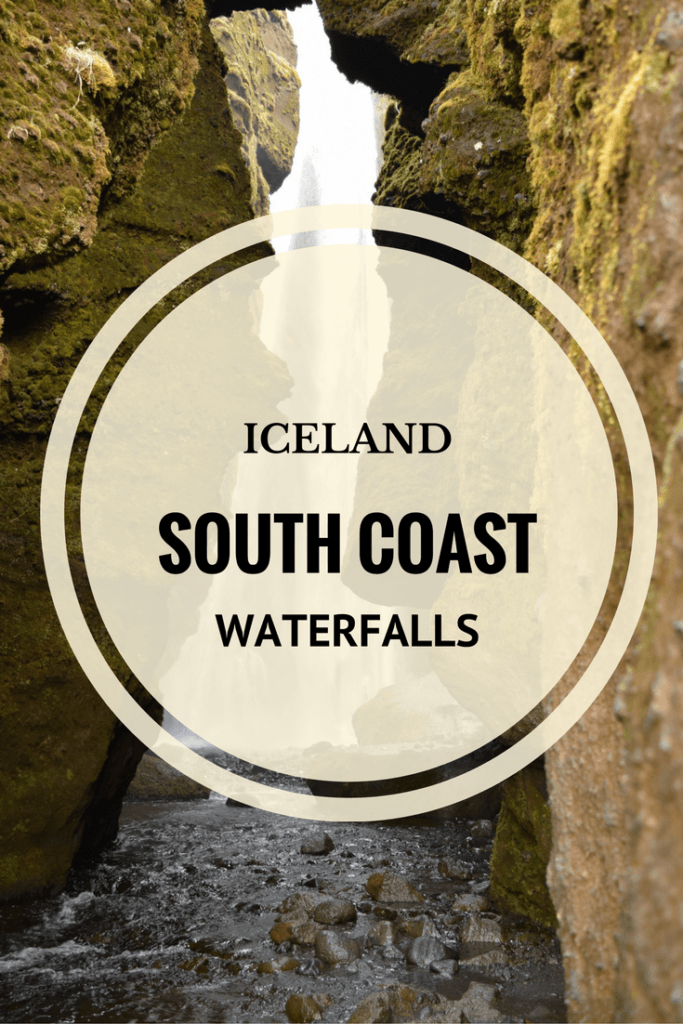 A Luxurious Stay At Grotto Bay Beach Resort In Bermuda

How Much Does A Trip to Bermuda Cost?
Scroll to top