Summer is right around the corner which means we can’t wait to go outside and enjoy the sun. The rollout of vaccines is making it safer to return to our pre-pandemic reality but we still have a long way to go when it comes to international travel. Many countries still have travel restrictions in place. The U.S. requires a negative COVID-19 test for anyone entering the country. This is why many people are choosing to do road trips near home instead of traveling abroad. If you still have the itch to leave the mainland U.S., we have the solution for you. Here are four places to travel without a passport that seem far away but they are part of the U.S. Get ready for your next paradisiac destination, no passport needed.

Places You Can Go Without A Passport For Americans

Known for its natural beauty and warm people, Puerto Rico is the perfect destination to unwind after the lockdown. Visiting the streets of Old San Juan, you’ll be surrounded by colonial architecture it will feel like you’re traveling back in time. Going to Puerto Rico means spending at least one day, if not your whole trip, resting at the beach. Definitely make time to visit Isla Verde or any other of the island’s white-sand top-rated beaches.

Puerto Rico was under Spanish rule for centuries until it became American territory after the Spanish-American War in 1898. While the island isn’t a U.S. state, thanks to its commonwealth status, Americans can visit without the need for a visa or passport.

Puerto Rico requires all travelers, no matter whether they’re fully vaccinated or not, to fill out a Travel Declaration and upload a negative COVID test to the online portal prior to arrival. Keep in mind that there is a curfew in effect from 12:00 a.m. until 5:00 a.m. Besides those restrictions, all public beaches and natural reserves are open for you to enjoy.

Listen to this episode of The Thought Card Podcast, where we share what it was like visiting San Juan after Hurricane Maria.

Southeast of Puerto Rico you can find the U.S. Virgin Islands, made by St. John, St. Thomas, St. Croix and Water Island. The islands are known for their white sand beaches and infinite list of watersports. St. Thomas’ capital city, Charlotte Amalie, is home to many dining, entertainment options and resorts. If you’re a history junkie, make sure to stop by St. Croix’s historic district and St. John’s Elaine Ione Sprauve Library & Museum.

The U.S. purchased the islands from the Danish in 1917 as a way to get a better military position in World War I. Since then, the islands have been a U.S. territory and soon became a top-rated Caribbean destination for American travelers.

The Virgin Islands are a common stop in Caribbean cruises but you can also take a flight from major cities across the U.S. Right now, all visitors must upload a negative COVID test to the Travel Screening Portal prior to flying, they won’t be allowed into the aircraft without it. However, you don’t need a test to come back to the mainland U.S.

Summer paradise? Hawaii. The state is synonym for dreamy vacations and it’s #1 in the bucket list of beach enthusiasts. Hawaii also has a rich history that you can explore at its several historical parks, temples and museums. Hawaii is composed of eight islands, seven of which are inhabited. Oahu island is home to Honolulu–the capital and major gateway for visitors going to the other islands.

After decades of American immigration and increased U.S. influence, the United States overthrew the Kingdom of Hawaii and turned it into a territory in 1900. Following the Pearl Harbor attack during World War II, there was a surge of American military activity in the islands and the U.S. conferred statehood to Hawaii in 1959.

Hawaii requires out-of-state travelers to present a negative COVID test or self-quarantine for 10 days. However, the state plans to let vaccinated tourists use their vaccination cards as a way to skip the test by July 4. If you’re looking for places to travel without a passport, add Hawaii to your list.

While it might seem that Alaska is a winter destination, the best season to visit is in the summer. From May to September, the temperature averages between the ’60s and ’70s with more than 15 hours of daily sunlight. This is the perfect time to enjoy its national parks with blooming vegetation and extraordinary wildlife sightseeing, including Denali which has America’s tallest mountains.

The United States bought the northern territory from Russia in 1867 and it soon got flooded by settlers after gold was found in the area. Alaska earned statehood status in the same year as Hawaii, 1959, becoming the largest state in the union.

As one of the places you can travel without a passport, Alaska requires non-vaccinated travelers to test for COVID either before their trip or at the airport (for free) but vaccinated visitors just have to show proof of vaccination.

Looking for more places you can go without a passport? Where would you recommend? Perhaps American Samoa or Guam? 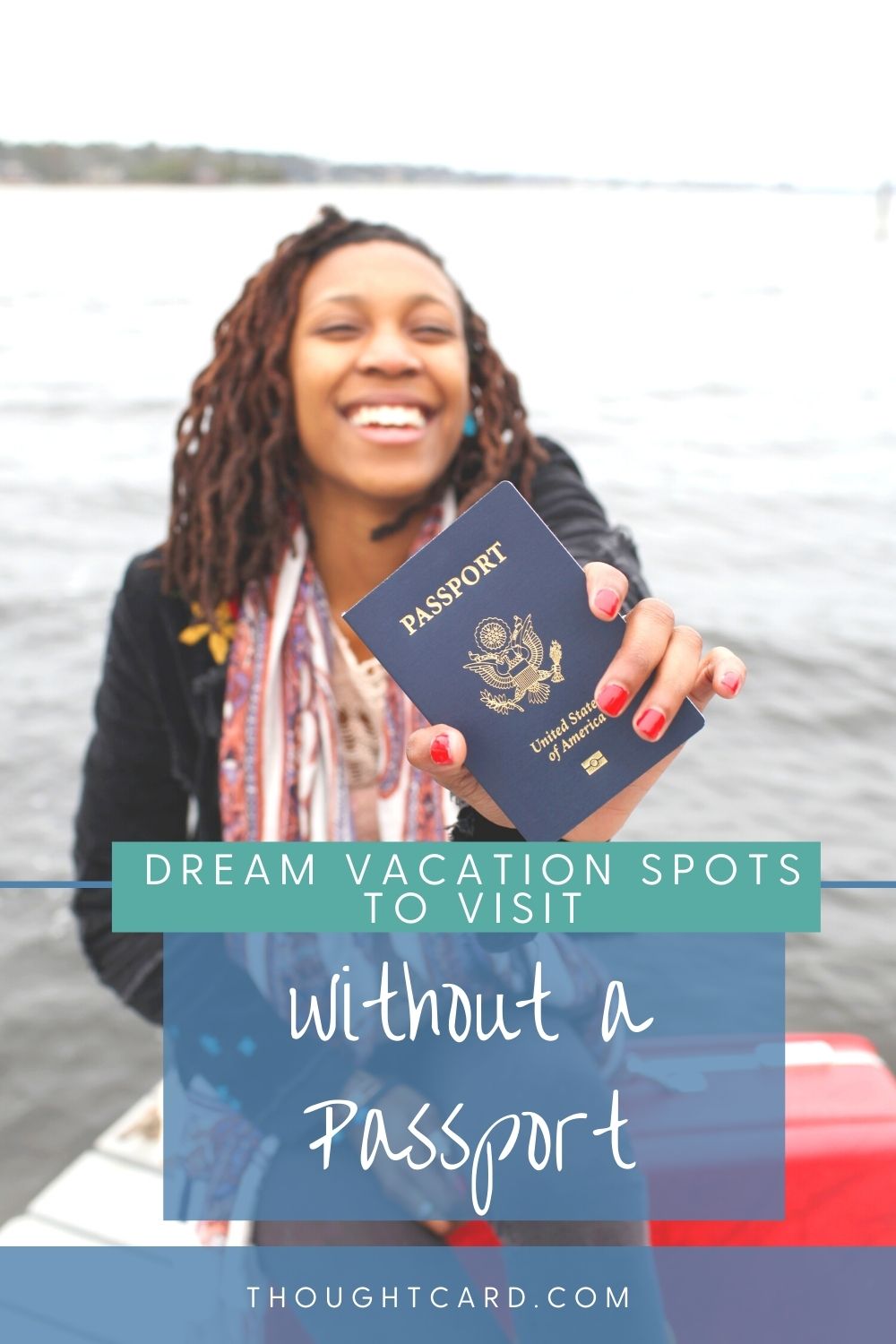 Alejandra Arevalo is a bilingual journalist and visual artist based in the San Francisco Bay Area. She’s covered several beats including social justice, food, beauty, entertainment and travel. On top of her journalism work, she’s illustrating a digital-native graphic novel with a tentative release date in Fall 2021. Whenever she isn’t writing, drawing or photographing, you can find her biking around the city or playing with her cat Mochi.

Episode 76: How To Manage Your Money While Traveling Abroad and Domesticall...
Scroll to top