Tucked away in the Wicklow Mountains, visiting Glendalough is like stepping back in time. Only an hour south of Dublin, Glendalough is one of the most important monastic sites in Ireland. With breathtaking valleys and scenic lakes, it’s an incredible destination to visit in the Irish countryside.

While looking for day trips outside of Dublin, I stumbled on a brochure for a bus tour to Glendalough. Even though I didn’t do any research ahead of time, Glendalough was an easy sell. It’s a popular day trip from Dublin and on the bus tour, you get to visit the Wicklow Mountains and Kilkenny – the Medieval Capital of Ireland.

The Wicklow Mountains seemed like a great place to connect with nature and I couldn’t resist the opportunity to learn more about Ireland’s rich ancient history. I immediately booked a bus tour and in many ways, it reminds me of Cleeve Hill in Cheltenham, England.

Walking through the ancient city gates, I imagined what the city was like back in its heyday.

The surviving ruins include an impressive 98-feet round tower. The tower is one of the first things that you will see driving in. It is nearly 1,000 years old and it served as a lookout post and refuge for monks when the monastery was under attack.

There are also several 10th and 12th century stone churches. The cemetery has many well-preserved Celtic tombstones.

The cathedral is my favorite building in the city. It is also the largest. Inside you’ll find the first kitchen sink in the world. Notice the wet and dry areas.

At Glendalough, you can touch the ancient stone. You’ll also walk over tombstones – no big deal!

Hands down, Glendalough is one of the most beautiful places in Ireland. It is timeless.

Nestled between two lakes, Glendalough is named the “Valley of Two Lakes”. It has rolling hills, mossy forests, and small streams.

Even in the winter, the glacial valley was colorful. The surrounding mountains were green, brown and orange.

After visiting the monastic site in the Lower Lake, I followed a paved walking trail to the valley where the Upper Lake and Lower Lake meet. 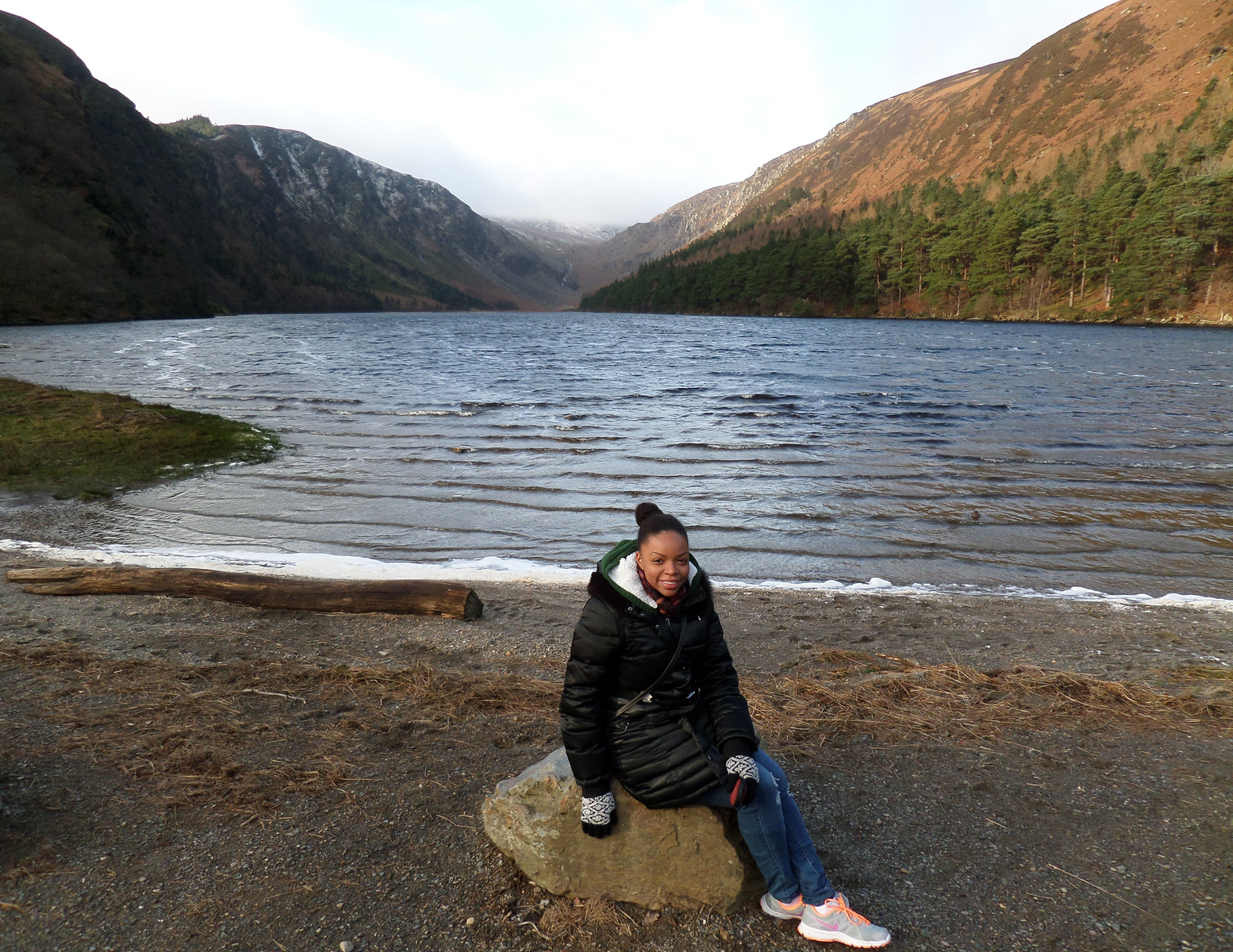 One of the most picturesque views Ireland has to offer.

Within twenty minutes, I arrived at a small rocky beach with breathtaking views of snow-capped mountains. These mountains date back to the Ice Age.

Even if you don’t have a lot of time, the views are worth the short hike.

One word to describe Glendalough, magical. Guided bus tours are a relaxing way to sightsee in Ireland. However, if you value flexibility, rent a car.

Since Glendalough has many walking trails, one of the best ways to see the region is on foot. Another sightseeing alternative to bus tours and car rentals are walking holidays.

Covering 57-79 miles on foot, Macs Adventure offers 7-10 day Wicklow Way self-guided walking tours. Wicklow Way’s forests, farmlands, and mountains make it a popular walking route in Ireland. Wicklow Way is also part of the European long distance trek from Cork to Turkey. Complete with B&B accommodations, on these Glendalough walks, you can also explore the monastic ruins at your own pace.

Hike past Ireland’s highest waterfall and experience Ireland’s remote uplands. You can even stop at small towns and villages to meet locals. Again, Glendalough is perfect for outdoor exploration.

How Much Does A Trip To Chicago Cost?

Travel Essentials: How To Keep Organized On Weekend Trips
Scroll to top