In planning my first trip to Toronto, visiting the Toronto Islands was high on my list. However, due to flooding, the islands were off-limits. So instead, I met up with my Torontonian friends Chris and Gogo at Amsterdam BrewHouse. Chris from Rudderless Travel is a fellow craft beer enthusiast. He recommended the brewery after I mentioned wanting to check out Toronto’s local craft beer scene. Right on the Harbourfront, Amsterdam BrewHouse blew me away with its fantastic views of Lake Ontario. This is before I tried the beer or tasted the food. We spent the rest of the afternoon eating and drinking our way through Amsterdam, so much so that I completely forgot about the Toronto Islands.

Amsterdam BrewHouse is a lively and festive brewery in Downtown Toronto. It has two locations. The main facility is in North Toronto. This is where all the production, packing and distribution happens.The BrewHouse on the lake features a brewery, eatery and a retail store. It specializes in “adventure brews”, small specialty batches made exclusively for the restaurant. Amsterdam has brewed beer at the Harbourfront since 2013. The 14,000-square feet lakeside brewery features an impressive space. The restored wood beams and exposed brick walls date back to the Great Depression.

Amsterdam plans to open Amsterdam Barrel House in Leaside this Fall. The Barrel House will seat 400 guests and will offer an intimate brewery experience.

Related: How Much Does A Trip To Toronto Cost?

How Amsterdam Brewery Stands Out

Beers aren’t packaged at the Harbourfront. Instead, when they’re ready, they go straight to the bar in the restaurant. This speaks to Amsterdam’s commitment to fresh beer that uses all natural ingredients, no preservatives or additives.

Seating over 1,100 people (at a time), Amsterdam BrewHouse is the second busiest restaurant in Canada. But don’t let the lines deter you, the contemporary dishes and Canada-style beers are absolutely fantastic!

Before having lunch on the patio, we joined a brewery tour led by Helder, the Guest Experience Co-Ordinator. Helder was knowledgeable and enthusiastic. He made the 30-minute free tour fun and engaging. Throughout the tour, we had plenty of Aha moments from all the new things we learned.

We started the tour and tasting with the award-winning Blonde Lager. The Blonde Lager is one of Toronto’s original craft beers. It’s been an Amsterdam staple for over 31 years. 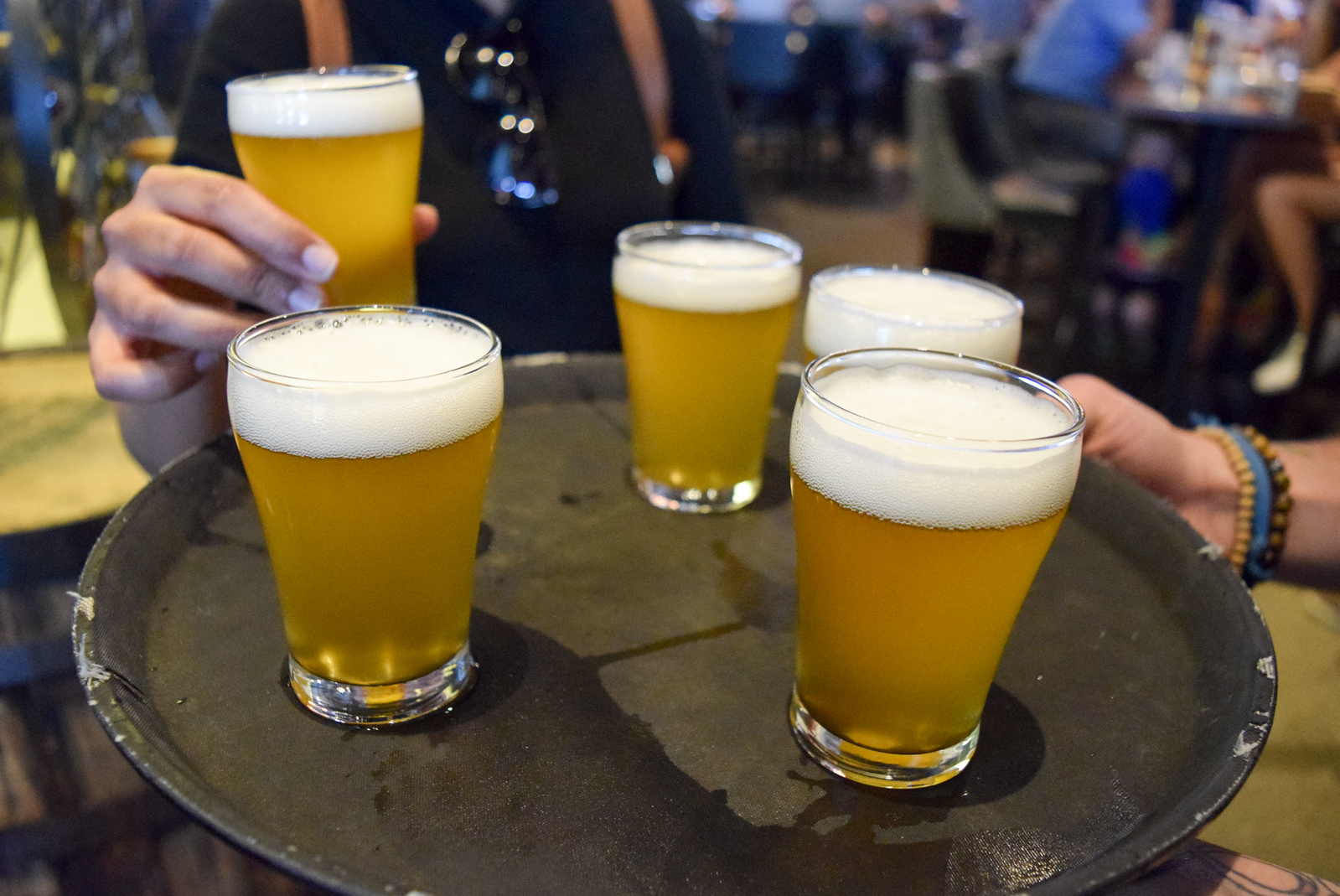 Among thousands of breweries in Canada, the Amsterdam Blonde Lager ranked the best lager in Canada. I love blonde beers but this traditional blonde lager is one of my favorites because of its crisp taste and mellow finish.

Helder then reviewed the four main ingredients of beer: hops, malt, water, and yeast. He then passed around a variety of malts. We also reviewed how hops add bitterness, flavor, and aroma to the beer. 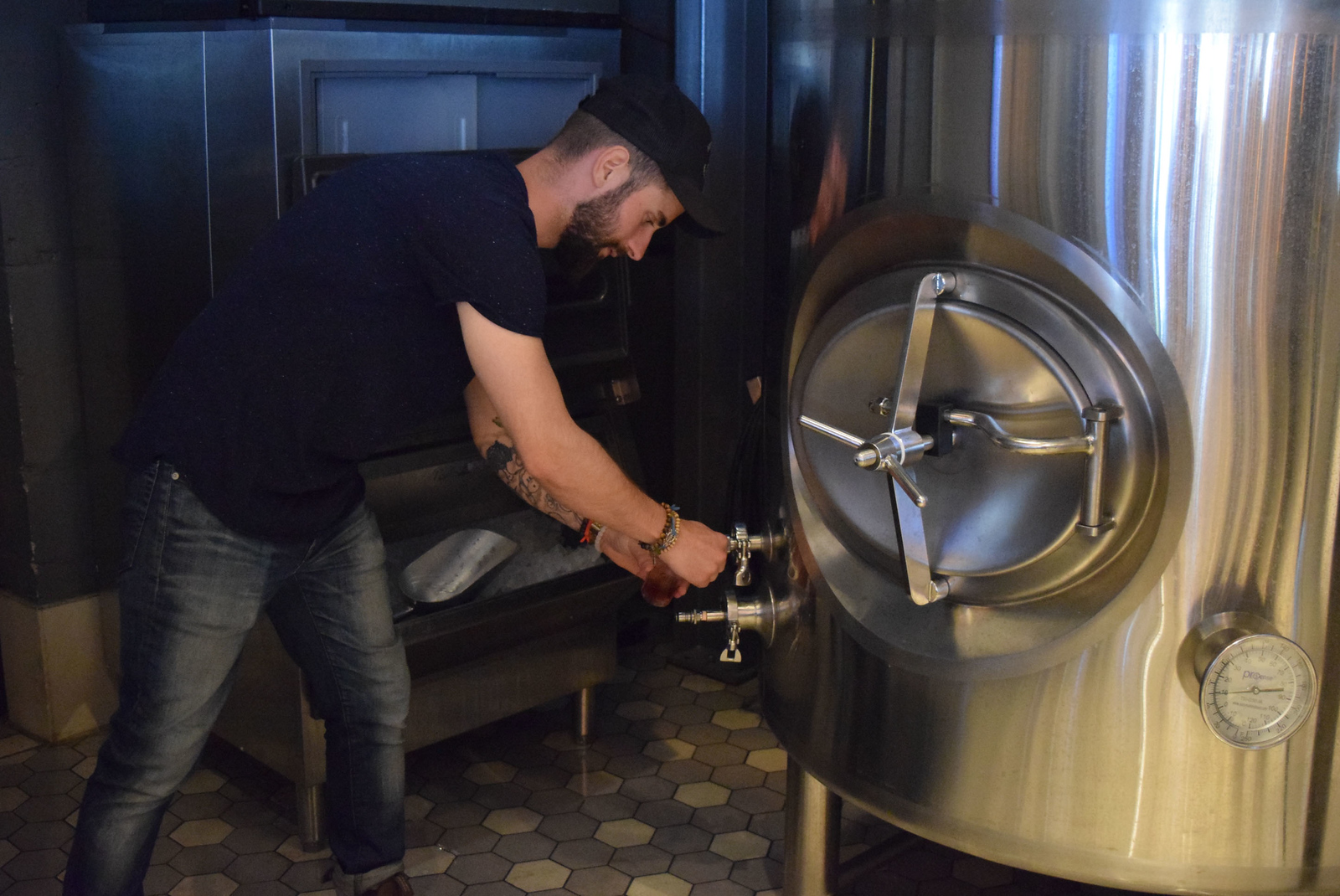 Before the tour ended, we reviewed the beer making process and tried a nameless beer. Aged in red wine barrels, Helder poured the beer into our glasses straight from the tank!

The brewery gifted us a small beer opener as a souvenir.

For the full scoop on our tour, check out Christopher Rudder’s awesome recap video of our time at the best Harbourfront Restaurant – Amsterdam Brewery.

From Amsterdam’s 300-seat lakeside patio, we enjoyed the views of Lake Ontario and the Toronto Islands. The weather was perfect so there were lots of kayaks and small sailboats on the water. If you rather sit inside, the dining lounge is spacious and seats 400 people.

Despite being extremely busy, our waiter was attentive and insightful. I couldn’t believe it was his first day on the job! 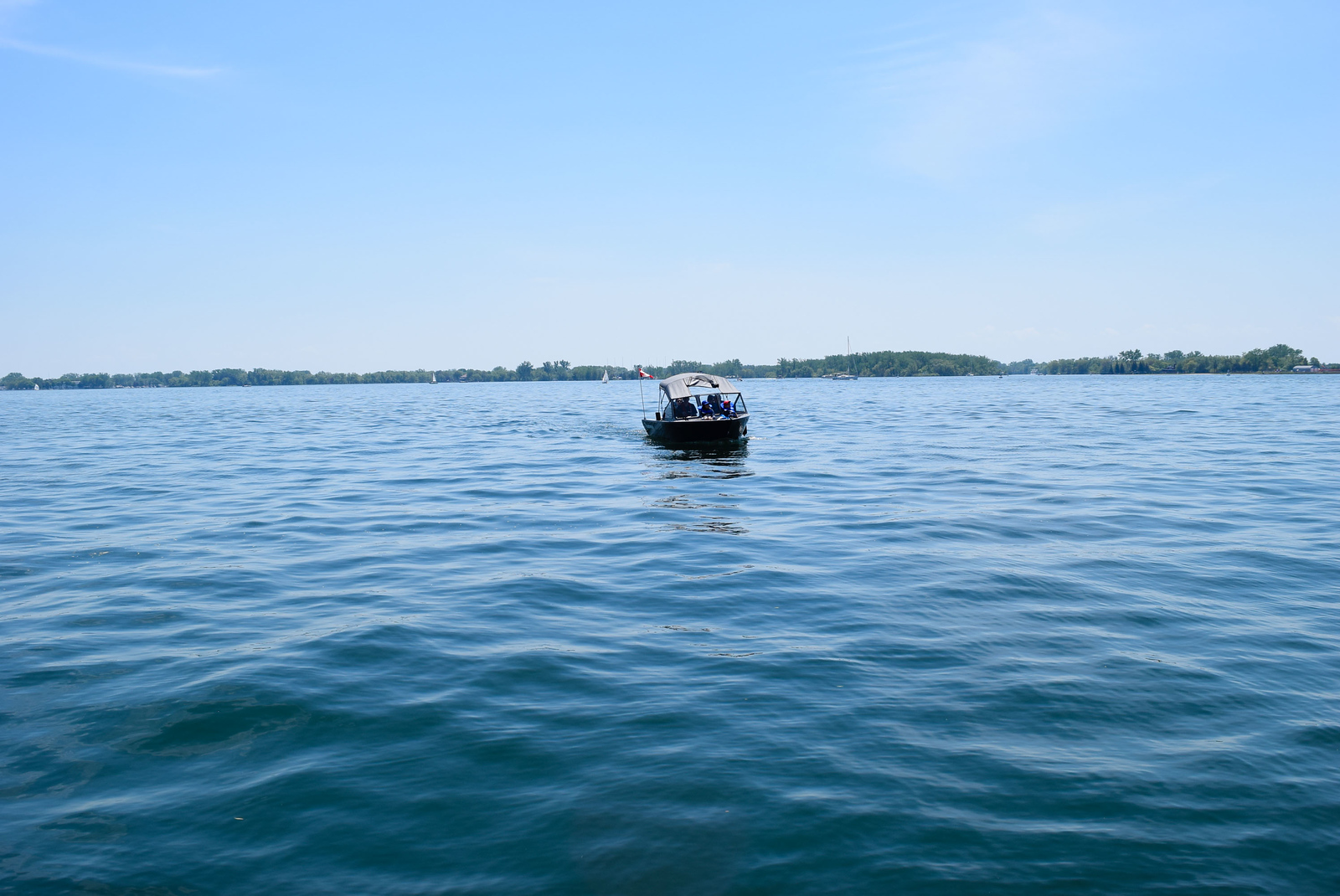 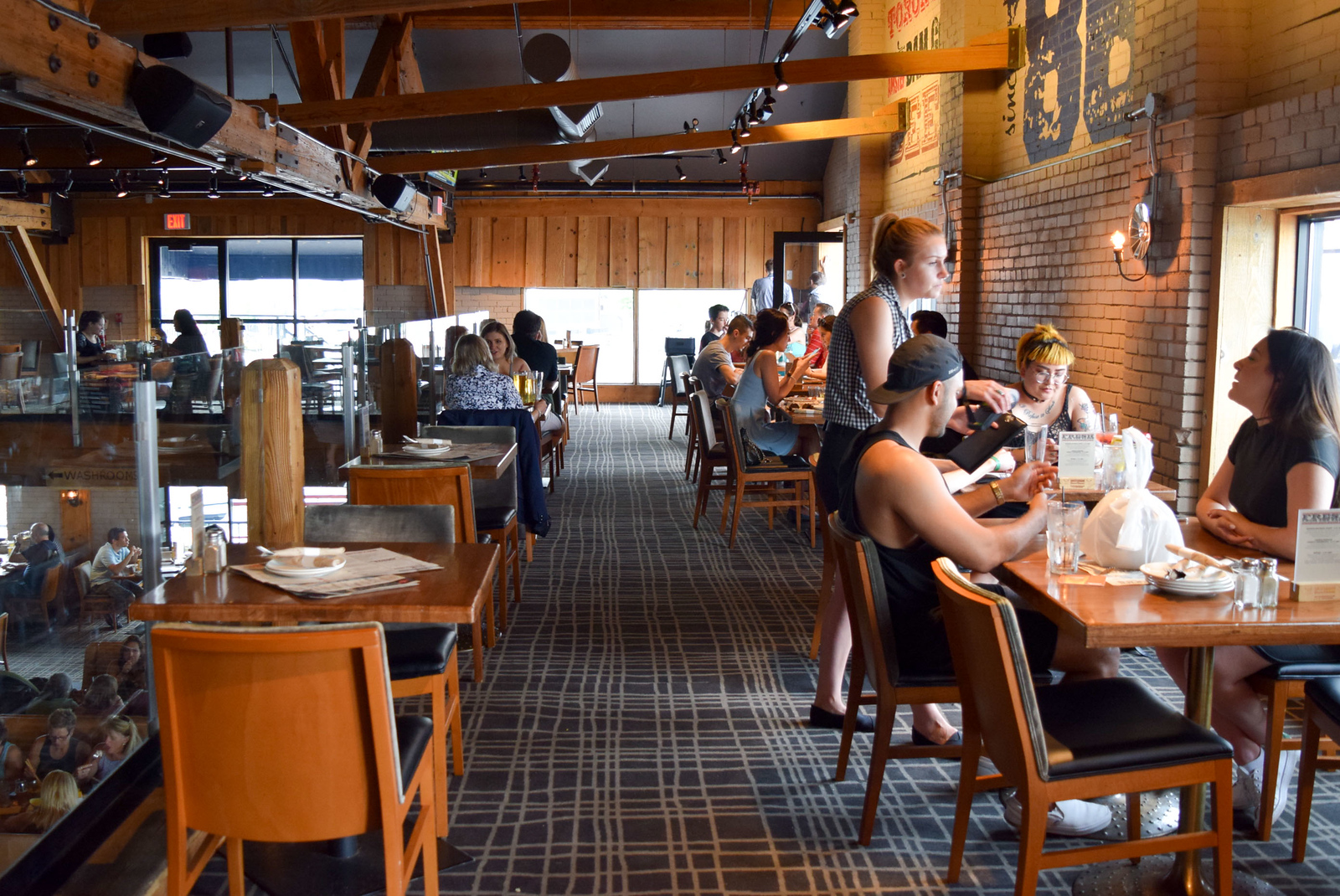 At Amsterdam, craft beer meets artisan food. The food menu is seasonal and it creatively infuses beer and brewing ingredients. The chefs use beer to create sauces, glazes, and syrups for desserts. Some dishes even use spent grain or wort (young beer). Furthermore, all the ingredients are fresh. The vegetables, potatoes, beef, chicken, and salmon are never frozen.

But here’s my favorite part –  the menu ingeniously suggests the best beers that pair well with each dish. For newbies, this takes the guesswork out of finding the right beer for your meal. Lastly, Chris feasted on the Lemon Chicken Schnitzel. Breaded with spent grain and dressed with crispy capers and sautéed rapini, it paired perfectly with the KLP Raspberry Wheat.

If it’s your first time visiting the brewery, order beer flights to familiarize yourself with the beers offered. When you find a beer that you love, take a growler home with you.

Have you been to Amsterdam BrewHouse? What’s your favorite Toronto craft beer?

This is a collaborative post with Amsterdam BrewHouse, all opinions are my own. 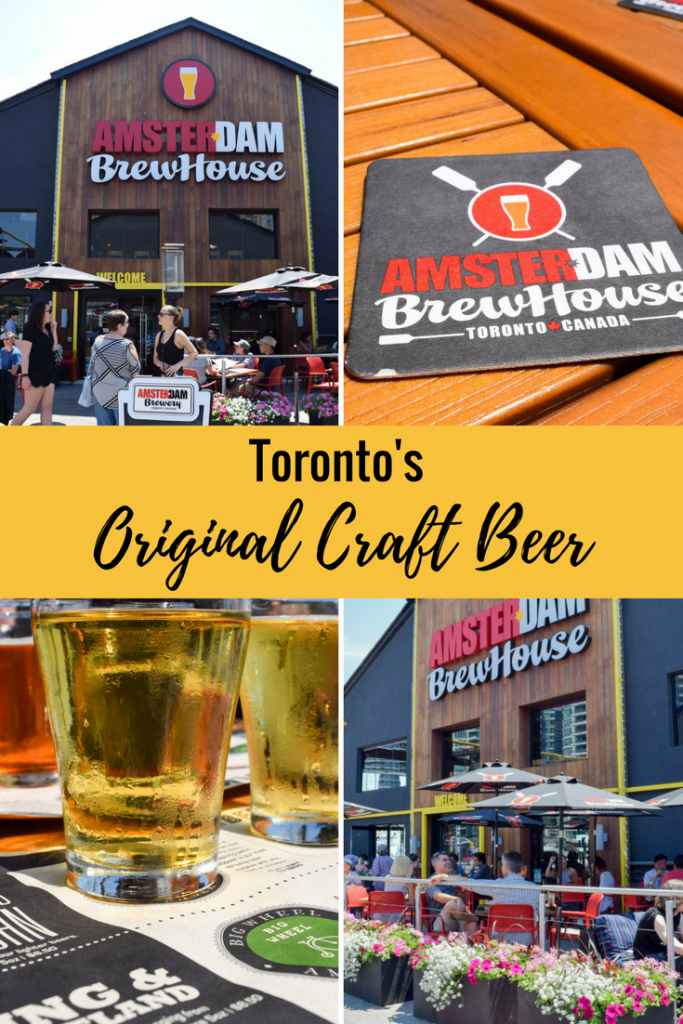 Things To Know About Money When Traveling To Cuba